Moving your home is never easy; you don’t realize how much stuff you accumulate (or hoard in my case) overtime until you physically have to touch every single item. I am only 29 years old and I have moved 13 times already, 4 of which were internationally, therefore I’d like to think I am somewhat good at it. I was going to say used to it but let’s face it you can never get used to the fact you have so much crap in your house. Each move cost me a fortune, I’m not talking ‘forking out hundreds fortune’ but the number of items I have given away or thrown out because I no longer needed was shocking. When I used to run my blog, like a proper Influencer wannabe I used to buy so many things, use them once and then they just ended up collecting dust. What a waste. Our recent move from Ireland to Vancouver, really was an eye opener. We got our visas granted few months prior to us relocating, so I was well ahead of the game and sold 90% of my things that I no longer used; simply because I had the time to take photos and get them up online. Anyway, I am moving off the topic altogether. 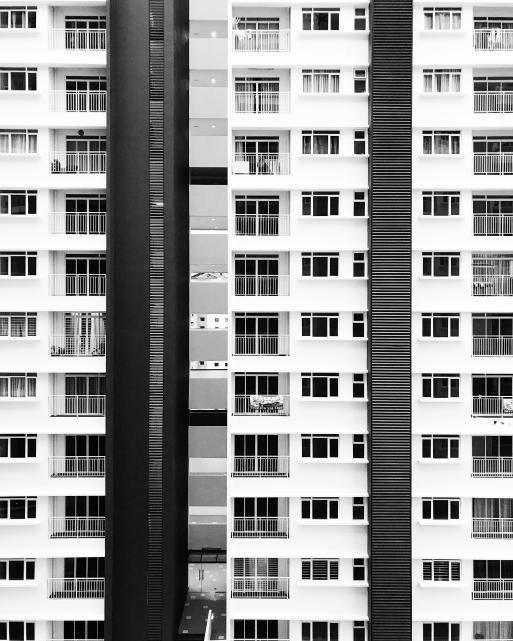 Looking for an apartment in Vancouver can be a challenge, up until COVID hit all the best places were taken, buildings had wait lists for months and you were paying extortionate rates. Then COVID hit and we got lucky, with a one-bedroom apartment on an upper floor with a balcony, with a gym and swimming pool onsite for the same amount as we paid for a studio when we first arrived.

When we first arrived, we stayed in a sublet for 2 weeks & then found our Studio apartment; I am not going to get into it again here because I could write a book, but if you’d like to read about our initial move you can do so here. Our studio was fully furnished which is exactly what we wanted, as A. We didn’t want to spend all our savings on furnishing a place from the get-go B. We had no jobs secured at that point and C. We didn’t know if we would like the area we chose, so that saved us hauling furniture across the city.

There was everything you could want in the apartment, from bed sheets to utensils – you name it, it was there. Therefore, deciding to move into an unfurnished place was such a big one to make. Most of the apartments in the city come unfurnished, you must supply everything from towel hangers to garbage cans. You don’t realize how much you need until you find yourself in a totally empty apartment. Nonetheless we decided to move into an unfurnished place, because we found an apartment we liked and renting a furnished place costs around $300-$400 extra a month, so spending $200 as a once off to get it furnished seemed like the wiser choice financially.

–          Facebook Marketplace: On a daily basis there are new listings for free furnishings, home-ware – kitchen and bathroom, outdoor furniture, home décor. You name it, it’s there; what’s even better is that there are so many things going for free that you get to pick and choose, and you can also set it by location so its convenient to where you live. For example, our U-Haul didn’t have any vehicles available for over a week during the times we needed it for, so our friends helped us carry a couch —- 14 BLOCKS! It was exhausting, laugh through tears experience and I worked on my upper body strength. We bought the 3-seater couch for $40 (cheap as chips!) and they threw in 3 cushions & a throw with it. #Winning We also purchased on a vacuum through a Facebook Market for $10!

–          Facebook Groups: Buy & Sell Groups; There are groups for Irish people in Canada which are also very useful; if you are purchasing something from these groups at least you’re helping a fellow national! This is where we got our queen size bed for free with a frame. This also happened to be in the same week as the couch, so we carried the bed, with the same friends, this time only 2 blocks! There was a girl on one of these groups selling a brand-new Marks & Spencer’s duvet for $25 – she was located right on our bus route, which was another win for us. When we went in to collect the duvet, she gave us free sheets to go with it, 2 sets of brand-new silver cutlery (one of which I am passing along for free to another Fellow from the same Facebook group) and set of wine glasses and drinking glasses both brand new still in their boxes. The generosity of people in this city never ceases to amaze me. (EDIT: We are now very very good friends with this girl & her husband! You can’t make many new friends due to COVID so you do what you can to hold onto the ones you meet 😉 )  Other things purchased through Facebook Groups were 2 brand new camping chairs (for a total of $10) which now serve as dining chairs in the new apartment, until we sort out an alternative and a TV for $50 way back when we first arrived and a girl threw in a free hairdryer. We also got a glass dining table totally for free, from a girl who happened to live in a building right behind us!

–          Friends Leaving the Country: I know, this ‘title’ really sounds like we are being vultures however if your friends or people you sort-of know are leaving to go back to their home country, isn’t it better that you buy items from them? You know if they are clean (I mean there’s nothing worse than buying something from a dirty apartment), you will be doing them a favor and they might give you a deal. This happened to our friends at the beginning of March which was unfortunate, we ended up buying a 6 Basket storage from them for $20 (which now serves a purpose of a TV stand until we sort something else out) and they threw in a shoe storage for free.

–          Check Your Building: More often than not, people who cannot dispose of their furniture and they must do so if they are vacating an unfurnished apartment will leave the better pieces downstairs “up for grabs” – at least that’s what happened in our last apartment building. This is how we ended up with a lovely black wooden chair, it goes very well with our glass table. Pity there was only one! The other person has to sit on the camping chair to eat dinner 😊

–          Thrift Stores: This is a great place to get your bits for the apartment and the money raised goes to a good cause. I love going into the thrift stores, you never know what you’re going to find. I also love how it is “culturally acceptable” to do this in Vancouver. I can’t say I know one Irish person going shopping in a Charity Shop in Ireland. There’s a great Thrift Store on Granville & Drake called Wildlife Thrift Store and they have everything from trinkets, utensils, books, furniture & clothing. Even going in for a look is such a cool experience.

–          Dollarama: This is the equivalent of Dealz in Ireland. You will be able to fully furnish your kitchen and bathroom here along with some bits for the living/dining room. This is where we got most of our utensils, chopping board, strainer, mugs, plates & bowls, cutlery holders etc. This wouldn’t be a place where I’d buy knives or Tin Opener as they break pretty much after handful of uses. So far, we have spent around $79 on household items in Dollarama.

–          Local 99c Stores: As much as I adore Dollarama, I also like the smaller, local stores. Every time I purchase something there, I feel like I’m giving back to the community, by not shopping in a large chain. There are few of these located on Davie Street and you can find some treasures there.

We also go extremely lucky, as when we handed in our moving notice, our landlord decided to sell the apartment and said we could have anything we wanted from the inside. If you have watched any of my Instagram Stories over the last 3 months you will know that our apartment was old, and majority of items were broken it in. We have kindly taken him up on his offer, but we only took few bits from the apartment such as: Clothes Drying Rack; 3 Pots and couple of cooking utensils such a Spatulas etc. We are also going to take one large storage until, but Warren has to paint it first, because its awful looking and its missing handles; but I’ll get those in Dollarama and Shabby Chic that baby right up!

In terms of the bills in our new apartment, we are responsible for the Electricity & Internet which we are getting installed this week. I cannot comment on providers, as our experience hasn’t really started, but they definitely have better deals online (such as free credit) than in stores so I’d advise Googling them first.

Our first night was spent without any light, as we got no lamps in the apartment yet haha, but hey that’s for another day – another adventure.

There were no moving costs, as our friends helped us carry the two large items we had and we were lucky enough to be moving 5 minutes down the road from where we first lived.

To sum this up, this has been our spending thus far for the new apartment:

BC Hydro charges $50 refundable deposit which I haven’t accounted for here, as this will be returned to me at the end of our contract.

As you can see, we have been very, very lucky with our journey so far and the sale of the studio apartment was a total coincidence. However, if you are resourceful, patient & you can persevere you can arrange your apartment for next to nothing! Don’t stress, get yourself the things you must have such as a bed & a table. Couch can come later, if you don’t mind sitting on the ground. Eating of the ground however is not very comfortable!